In 1895, Mrs. Kate Sniggs, Mrs. Lulu Frantz-Whitson, and Mr. W. E. Schulte sponsored a reading room and library for the community’s young men and women. This reading room was hosted in Harvey Coverdale’s Clothing store at 110 South Washington. Later, the library was moved to the building just south of the Antlers Hotel, which was located on the southeast corner of Washington and 7th Street. 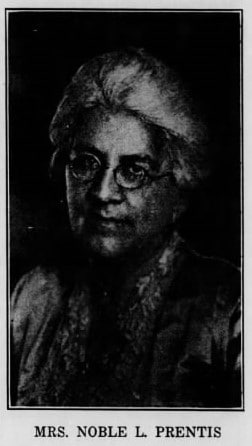 In 1898, several young women met and organized a club and decided to name the group for Mrs. Caroline Prentis of Topeka. Mrs. Prentis was the wife of a widely known Kansas writer and historian, Noble Prentis, and was a leader in the Women’s Federated Club Movement.

In 1899, Mrs. Prentis came to visit the club and suggested that the young ladies focus on a worthwhile civic project. She suggested several ideas, but it was the idea of establishing a library for Wellington that caught their interest and they began to work towards that goal.

So – on the following New Year’s Day, the club of twenty members held an open house for some of the young men of the town at the home of F. K. Robbins whose daughter, Miss Edna, was a charter member of the club. Each gentleman was requested to bring a book in place of the customary card. In this way about two hundred books were obtained.  The club held other fund-raisers to collect books and donations of money. Later, the young women of the Prentis Club hosted a fund-raising event in the brand-new jail building.

Harry Buttrey, owner of Buttrey’s Shoe Store (located at 114 S. Washington according to the Wellington City Directory) volunteered the use of several shelves in his store, and so the young ladies’ Prentis Club Library found its first home.

The library was open on Saturday afternoons, and then, as now, the library had a great deal of support. Club members volunteered as librarians until Maude Barrett was elected librarian, a service she performed for two years.

The Prentis Club continued to support the growing library, and money, furniture, and books were donated. When the new Wellington City Hall was being built at the northwest corner of Washington and 7th Street, where Heritage Park stands today, the club women were promised two rooms on the second floor; one was to be used for the library, and so in 1906, the Prentis Club Library relocated to the new city building.

As the library continued to grow it was also outgrowing the Prentis Club member’s ability to oversee it, so they asked the mayor to arrange for the city to take over the library.

The Wellington Library Association, with a capital stock of $5,000.00 sold at $1.00 per share, was set up. The Women’s Federation donated $1,200.00 for furnishings. In March 1908, it was determined to incorporate the library under state law relating to public libraries. It was voted to maintain the name Prentis Library, in honor of the Prentis Club, and the young women who worked to found it. The Prentis Club turned their books and the $250.00 which was in their library fund over to the city of Wellington, and the library resided in the City Building until the Carnegie Library was opened in 1916. 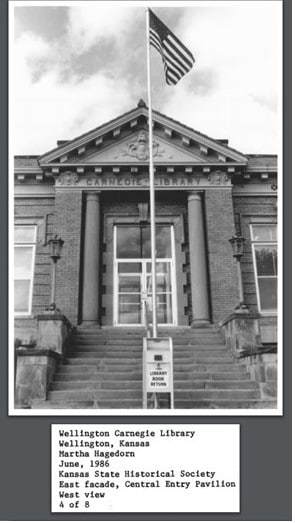 On April 1, 1914 at the spring election the voters approved the support of a public library. In May 1914, the Wellington City Library board held its first meeting and voted to begin the process of erecting a library building.

On April 10, 1915, it was voted to buy a site from the Long-Bell Lumber Co. at the corner of 7th Street and Jefferson Avenue for $3,000.00. The board had begun negotiations with Andrew Carnegie, and on April 19, 1915 the Carnegie Corporation stated that it would give $17,500 for the library building. The architect was C. W. Terry, Wichita, and the contract was awarded to J.H. Mitchell. The building was completed in December of 1915, but remained vacant for some time due to a delay in the receipt of the new furniture. Meanwhile, Miss Flower and Miss Hackney, the librarians, cataloged books. The library building was informally opened to the public July 1, 1916.

In 1986 the Library Board of Trustees and community became involved in a project to enlarge and renew the original structure; June 6, 1987 the Wellington Carnegie Library was entered on the National Register of Historic Places; 1988 ground was broken to start the exterior shell of the addition to the building. For nearly two years the library was in temporary housing as the interior underwent extensive renovation. The interior of the library maintains its original open floor plan and vestibule entrance. The first floor pillars retain their marble wainscoting.

Digital Wellington got its beginnings in 2017 when librarians and volunteers became concerned about a few books and documents too fragile to be on the shelf, including one book from the 1800’s with the original Prentis Club Library’s stamp inside the front cover.

With the assistance of the Sumner County Historical and Genealogical Society, a grant from Humanities Kansas Council was pursued and the library was awarded a $3,500 grant for the project.

The Humanities Kansas Council, www.humanitieskansas.org, is a nonprofit organization that supports community-based cultural programs, serves as a financial resource through an active grant-making program, and encourages Kansans to engage in the civic and cultural life of their communities.

The Humanities Kansas grant allowed the Wellington Public Library to begin its digitization project by digitizing and uploading several fragile documents, photographs, and magazines, including a November 1928 Kansas Veteran’s magazine that contains the names of Kansas World War I veterans buried in France and an 1871-1971 newspaper clipping scrapbook put together by former Wellington historian, Dorothy Dey.

Today, ‘Digital Wellington’, located online at https://wellington.digitalsckls.info/, is hosted and supported by the South Central Kansas Library system, and allows books and documents that are no longer available in the library to be read and accessed from anywhere in the world.